SPAIN BOOSTS ITS AUDIOVISUAL INDUSTRY WITH A €1,600 MILLION INVESTMENT

The President of the Government, Pedro Sánchez, provided details of the Spain Audiovisual Hub plan, which aims to turn Spain into one of the main audiovisual production centers in Europe and the world. 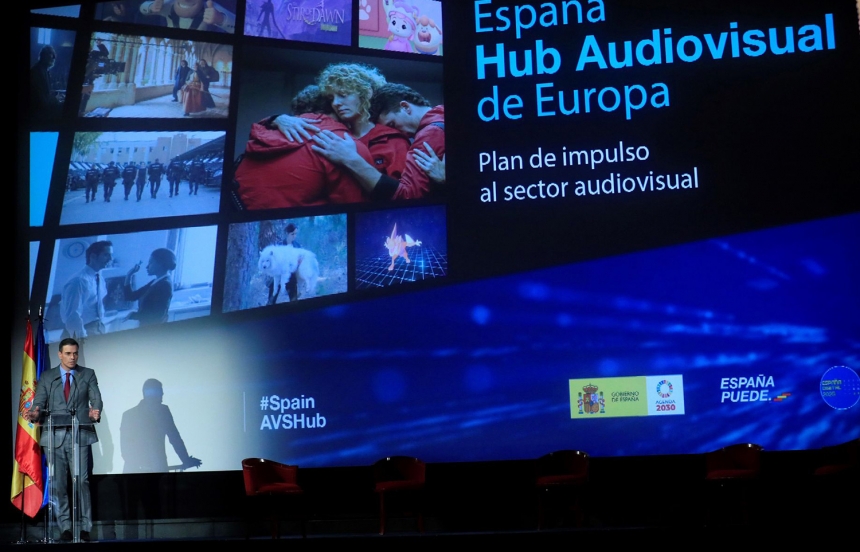 Spain will invest 1603 million euros in strengthening its audiovisual sector. During the next four years, the country will try to become one of the main centers of audiovisual production in Europe and the world. This was announced by the President of the Government, Pedro Sánchez during the presentation of the Spain Audiovisual Hub. "It is not only a question of attracting foreign investment, but also creating the faculties to further increase Spanish production in the audiovisual sector," he pointed out.

The executive also stressed the need to create a new ecosystem that facilitates the activity of all those involved in the production chain, (scriptwriters, actors and actresses, technicians and technicians, producers) and thus create audiovisual works that represent the cultural values of Spain and that can be extended to the rest of the world. "We are going to promote our own industry and our own industrial model, the Spanish and the European, because this is also one of the lessons that we have to learn from this world that has changed so radically," said Sanchez.

The Spain Audiovisual Hub plan has four main axes that are kicked off by an investment of 240 million euros and includes actions to digitize audiovisual production and monitor audiences, to promote the launch and improvement of platforms dedicated to Spanish audiovisual production and its distribution to favor its international commercialization, especially that of projects that generate collaboration ecosystems between SMEs.

Likewise, the Spain Audiovisual Hub Bureu will be created, a single point of information, assistance and accompaniment to potential investors in the sector, both foreign and Spanish companies interested in the internationalization of their activity.

The second main point focuses on facilitating access to financing and the application of tax incentives for audiovisual production in Spain, the axis that will have the most investments when it receives 1,330 million euros until 2025. In this way, the type of projects will be expanded liable to receive financing from ICO and projects that may be financed by ENISA.

The third axis of the plan seeks to adapt, with 15 million euros of investment, the training plans to the competencies demanded by the industry and to support the training that the companies themselves offer their workers and institutional support will be provided for the realization and dissemination of training programs launched by companies in the audiovisual sector.

The last point contemplated in this ambitious plan has to do with reforms that seek to improve regulation and eliminate administrative barriers through the renewal of the General Law on Audiovisual Communication and the Film Law with the aim of simplifying and reducing administrative burdens of the immigration system for reasons of economic interest and the creation of a digital window for residence and work visas related to audiovisual projects. This section will have an investment of 18 million.