According to recent Antenna data, a significant expansion in Churn occurred in Q3, with more than 32 million cancellations across the 10 Services we track in the Premium SVOD category. 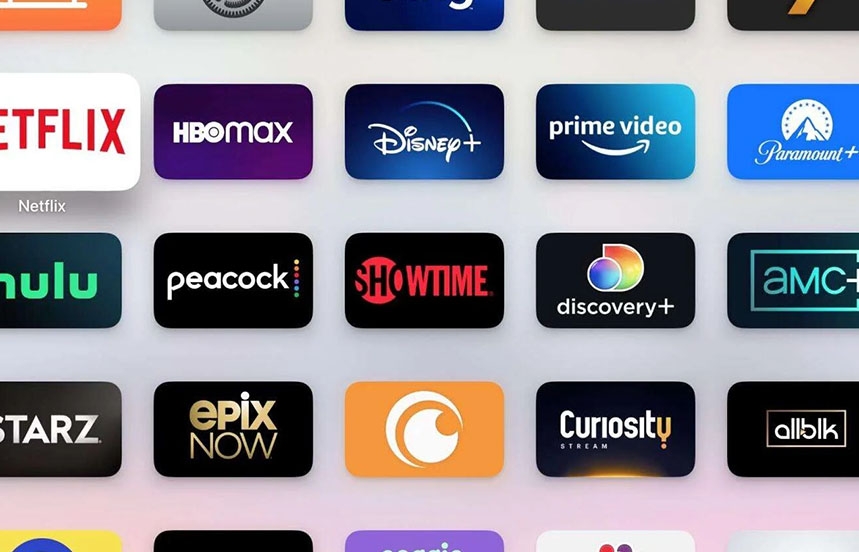 In Q2’22, Antenna already highlighted a marked slowdown in growth for the Premium SVOD category. The quarter-over-quarter Subscriber growth rate was 1.5%, the lowest we have seen since Antenna started tracking the market in 2019. Q3’22 saw slightly higher growth, with a quarter-over-quarter growth rate of 2.5%. Antenna has long highlighted Churn as a crucial dynamic in the SVOD industry. Antenna saw a significant expansion in Churn in Q3, with more than 32 million cancellations across the 10 Services we track in the Premium SVOD category. Cancellations for the previous two quarters were 28 million each. 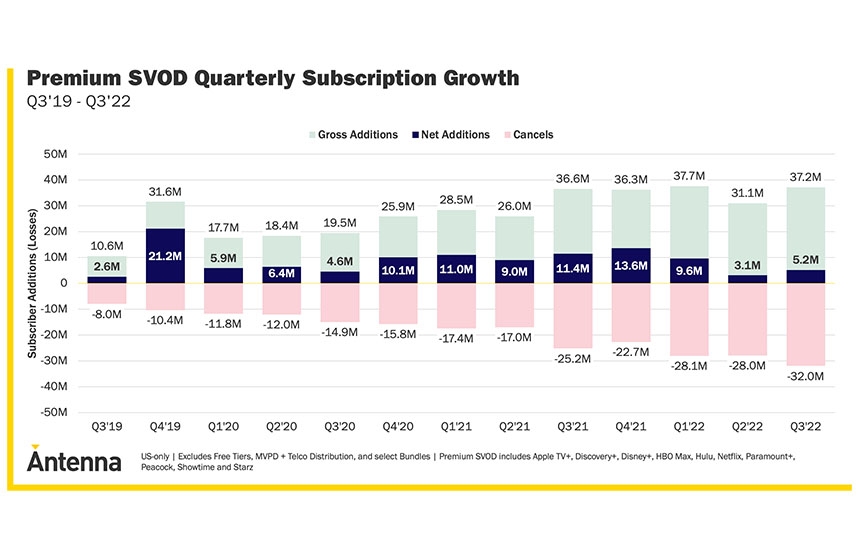 The Average Monthly Churn rate for the Premium SVOD category reached 5.8% in September. To put this in perspective, category Churn in 2021 was 4.5%; in 2020, it was 4.0%, and in 2019, it was 3.2%. Historical Churn data becomes even more insightful when analyzed at the Service level. Antenna previously documented a meaningful uptick in Netflix Churn following its last price increase in January 2022. In fact, Netflix’s Average Monthly Churn was up again in Q3, to 3.5% from 3.4% in Q2 and 2.0% in 2021.

Although Netflix is not the only Premium SVOD service facing increases in Churn, this trend is far from a universal rule in the category. For example, when we look at these historical Churn rates, three different batches of services emerge. First, Group A are services that have launched in the past three years since the so-called “streaming wars” began. Apple TV+ (after quickly settling down from a brief, initial high Churn launch), Discovery+, Disney+, and Peacock all have had fairly stable churn levels since their launch periods. These services were born into a highly competitive market and have battled difficult churn dynamics from day one. 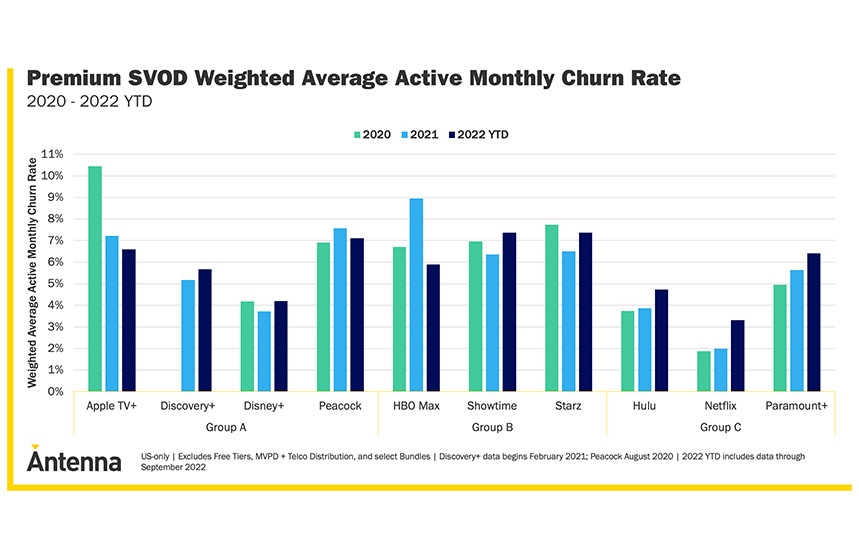 Second, Group B is the legacy linear brands: HBO, Showtime, and Starz. These services have been highly competitive with one another for decades (although HBO’s ambitions have expanded), driving acquisition around tentpole programming moments and then fighting to keep the new Subscribers once the show ended. That competitive dynamic has carried over to their streaming products, and their Churn has also remained stable over the past three years. (In September 2021, HBO Max saw a spike in churn following WarnerMedia’s decision to no longer distribute the service via Amazon Channels.)

Third, Group C is the SVOD originals. In the nascent days of streaming, each of these Services had a strikingly clear and unique value proposition: Hulu was “Yesterday’s TV shows”; Paramount+ (then branded as “CBS All Access”) was “Live sports and news without a pay TV subscription”; and Netflix was “Always something to watch” with its enormous catalog and groundbreaking personalization engine. While these Services certainly had to focus on Churn management, they were so differentiated in that less competitive market that they had significantly lower Churn than they face today. As the market became more competitive, however, the differentiation was more difficult for consumers to identify, and the average monthly Churn rates rose accordingly: from 3.7% in 2020 to 4.7% thus far in 2022 for Hulu, from 4.9% to 6.4% for Paramount+; and from 1.9% to 3.3% for Netflix.

All in all, competition in SVOD will only intensify in the future, so having a robust understanding of what impacts Churn and the strategies available to minimize it will continue to be critical for all market players.