The leading Italian highlighted the importance of alliances in the audiovisual sector, making it clear that it is essential in order to create premium and competitive content. Executives from Rai and France Télévisions, and ZDF have discussed this topic. 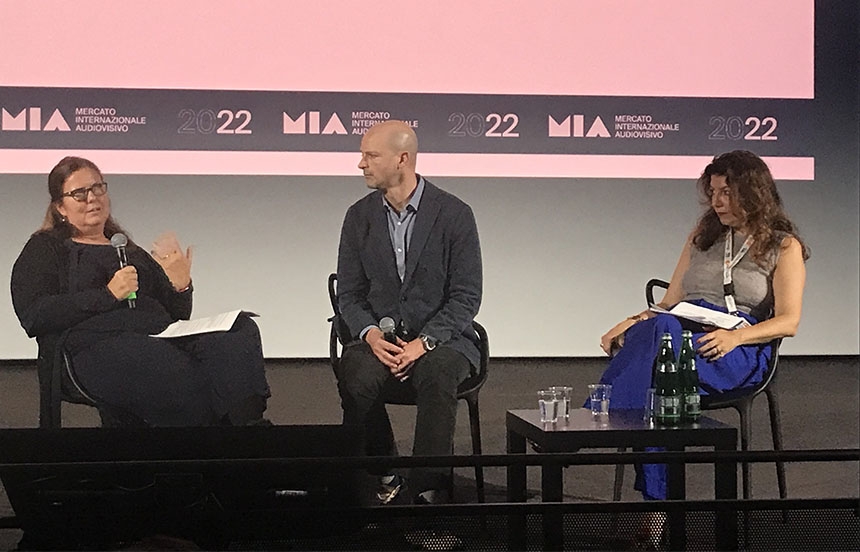 MIA Market kicked off at the Palazzo Barberini in Rome and will run until October 16. The benchmark market of the Italian audiovisual industry started successfully under the new management of Gaia Tridente with an increase of +12% in the number of attendees, and over 900 people are coming from all over the world, so the market is going global. "MIA is today an unmissable event for the Italian and international audiovisual industry; over the years, it has established itself as the most important Italian market in terms of attendance and results. It has helped to increase co-productions and business relationships internationally, along with the export of Italian audiovisual products. As Director of MIA, after years of experience as Head of Drama, I will strive to produce an ambitious and high-quality new edition that will be able to meet the needs of the industry and bring content in all its forms and declinations back to the center of the market" said Gaia Tridente, MIA Market Director.

One of the main examples of the industry’s union is the alliance that in 2018 the public broadcasters Rai, ZDF and France TV decided to make. In the frame of MIA Market 2022, The European Alliance announces the development of a new event series, “The Kollective”, an investigative series conceived by Leonardo Fasoli and Maddalena Ravagli (“Gomorra”) and Femke Wolting (“Submarine”), also a producer with Fasoli and Ravagli, which deals with relevant and topical issues such as the spread of fake news, the attack on European democracy and freedom of the press. The series is inspired by the true story of a group of independent journalists who have made investigations on the web their battlefield.

On the other hand, a very interesting conversation took place between Larry Tanz, VP of Content at Netflix for EMEA and Tinny Andretta, VP of Content at Netflix for Italy, where they talked about the future of Storytelling in Italy and EMEA, and they have revealed the key of Netflix's success. “In Netflix, the creators can create a story that suddenly travels around the world, and it has not to be in English o from Hollywood to reach the world; it has to be authentic,” said Larry Tanz.

Tinny Andretta asserted, “We are looking for stories that represent Italy but outside the prototypes. We want to work with the best director and authors, and first, we have to reach success in our local market, and after, we can reach an international audience," added Andretta. "We want stories that entertain, but also that can break taboos. These can be stories based on true events that speak to the audiences, the adaptation for big IPs, and we are also building our projects with anti-hero narratives".

The Netflix executives presented the new Italian scripted launch that will arrive on the platform in the following months but also put the focus on the unscripted sector. "It's a rising genre for us", affirmed Tanz. "Docu series are very popular nowadays, we launched 'SanPa' with great success and also made 'Wanna' that had success, and we will launch 'The Vatican Girl' in the frame of MIA. Besides, we will launch our first reality show, 'Summer Job,' and its original show made for Italians", added Andretta.

Another panel that highlighted the importance of the industry's alliance was "Working as Partners," where executives from YLE, Pink Parrot and AFilm unveiled the bright and dark sides of co-production in the animation sector. “We need to share the same passion about the project, and we have to trust in our partner to develop a project together”, affirmed Virve Schroderus, YLE Head of Children Content (Finland). “The co-production is like a marriage, it might be difficult, but if we share the passion, things will go well”, added the executive. “Public broadcasters have to bring some values to the consumers as example we don’t pick any show with arms or violence”, she explained.

Marie-Claude Beauchamp, Founder of CarpeDiem/PinkParrot/BlueDog Medias (Canada) explained the 360º strategy they implement with their animated projects. “The mission of Canada is to offer new media experiences in the content,” she said, and she put the example of the hit animated movie "Snowtime", the TV series "Snowsnaps" (TV series), and the second movie “Racetime." Around these properties, the Canadian company has created a 360º strategy that includes music concerts, merchandising, publishing, tours, sponsorship, and exhibitions. “We develop the approach in order to add value to the properties, so people can recognize them”.

In the same panel, Kristel Tõldsepp, Head of Studio and Producer at AFilm (Estonia) explained that they work as subcontracting. “In that way, we were able to work as a coproducer with studios that, in another way, we be never able to work with”. The executive also mentioned that Italian and Estonian companies can access a fund that supports Estonian-Italian co-productions.

WHAT'S NEW ABOUT AMAZON
MIA Market was also the perfect scenario to announce Amazon news in the audiovisual industry. The company confirmed that production is underway in Italy on the Italian installment of the "Citadel universe", the global-event series from Prime Video and the Russo Brothers’ AGBO. Prime Video also confirmed lead actress Matilda De Angelis ("The Undoing") as a starring series regular in the untitled Italian Original series alongside cast members Lorenzo Cervasio, Maurizio Lombardi, Thekla Reuten, Julia Piaton, Filippo Nigro, and Bernhard Schütz. The upcoming local Original spy series, which is the first local production within the Citadel franchise, will launch exclusively on Prime Video in over 240 countries and territories worldwide.

“We are very excited that production is underway in Italy of the Italian installment of the trailblazing 'Citadel universe',” said James Farrell, VP International, Amazon Studios. "We are also proud to welcome Matilda De Angelis and the entire cast of this amazing project to Prime Video. Working alongside these talents and the Russo Brothers’ AGBO is truly thrilling.”
“We are delighted to join forces with Cattleya and some of the most respected, productive, and creative teams in Italy to raise the bar on our local productions with this exciting and ambitious production. We are thrilled for Italy to lead the charge as the first local Original in this visionary franchise from AGBO,” added Nicole Morganti, head of Italian Originals, Amazon Studios. “The Italian Original series will be an epic television event, and we can’t wait to share it with our Prime Video audience in Italy and around the world.”

“Amazon and the Citadel franchise have given AGBO a remarkable opportunity to collaborate with top talent from around the world, and Italy is no exception,” said Angela Russo-Otstot, president of creative at AGBO and executive producer. “As enormous fans of Cattleya, we have been afforded a front-row seat to their superior work and leadership, and it has been a thrill. Together with David Weil, we are humbled to be partnering with Gina, Alessandro, all the writers, and the stellar cast of this incredible series.”

“Citadel is an exceptionally ambitious and challenging project, and it is an honor to be part of it,” commented Riccardo Tozzi, founder and president of Cattleya. “The Italian series is a spy story with elements of action, adventure, and fantasy—the genre is simply unprecedented for Italy and for Cattleya. Yet, even with its own creative and stylistic uniqueness, it fits into the fascinating Citadel universe. We are happy to have set out on this journey with great partners in Amazon Studios and all the talent involved. Citadel is new energy for us and, we believe, for the Italian series.”

By Romina Rodriguez from Rome