MARTINE ST-VICTOR AND ISABELLE RACICOT: "A CHANCE FOR US TO SIT AND LISTEN"

Podcast show, “Seat At The Table" hosts, Martine St-Victor and Isabelle Racicot told Señal  about the second season's inspiration, process of production, and their expectations for its engagement with the audience. 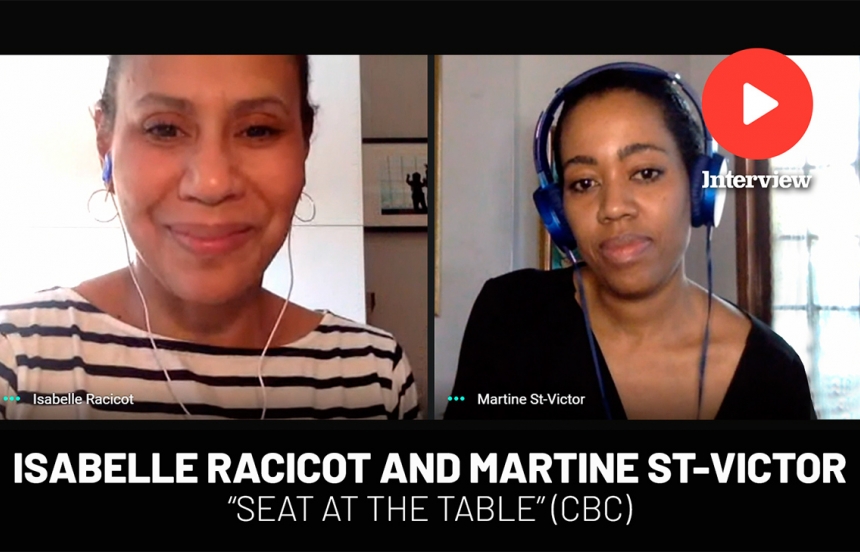 The podcast show,  “Seat At The Table,” returned for a second season on Canada’s CBC. The segment, hosted by best friends of over 25 years, Canadian radio and television Broadcaster, Isabelle Racicot, and Communications Strategist and Media Commentator, Martine St-Victor, premiered last Thursday, 27th August. Each of its six 30-minute episodes are scheduled for release every Thursday.

The podcast focuses on the urgency and importance of the Black Lives Matter movement, and the perspectives of notable guests from the media, sports, and pop culture. Racicot and St-Victor spoke with Señal  about the inspiration for the podcast, the process of production, and their expectations for the second season’s premier. “I think that both Martine and I were seeing it as a chance for us to sit and listen to people who have been on the ground, who have been talking about these problems for so many years,” Racicot said. “We called CBC and we were amazed at how fast they said ‘yes, we’re jumping on board’.”

Production for the second season was different from the first. As a result of the studio restrictions implemented to avoid the spread of the Covid-19 pandemic, the podcast session is now taking place as a virtual meeting via Google Hangouts as opposed to in-person. “The interaction is different,” St-Victor said. “I don’t think it’s better or worse, it’s just different.”

Despite the unexpected differences in terms of setting, the show’s main producer created a notion of familiarity for the presenters as she served as a junior producer for the show four years ago. “She knows us, we know her,” St-Victor said. “That's fun, to have the same type of environment.”

Last week’s in-depth conversation took place between St-Victor, Racicot, and the Ottawa Senator’s Anthony Duclair about what it’s like to be a Black hockey player. Journalist Salim Valji chatted about why racism remains one of hockey’s most taboo topics. Other examples of the show’s guests include Canadian Journalist, Malcolm Gladwell and Canadian music artist, Corey Hart. “Content is king, so we always want to have the most compelling guests with the most compelling stories,” St-Victor said.

Both hosts highlighted the effectiveness of having a podcast form to discuss dense and crucial topics because it provides time for a thorough conversation with the guests and allows them to learn as they listen. “It's slow radio in the sense that they're not five minutes segments, so we can really have a conversation with the guests,” St-Victor said. “That's always been at the epicenter. That's the genesis of the show.”

With the second season of the “Seat At The Table,” St- Victor and Racicot hope to educate the audience about the active battle for racial justice and encourage them to recognize their ability to take action against the issue. “I hope that it's going to create the desire for people to actually continue having these conversations and learning about a lot more about what's going on,” Racicot said. “I really believe that we're going through a moment in history.”

I hope that it's going to create the desire for people to actually continue having these conversations and learning about a lot more about what's going on.” Isabelle Racicot Host, "Seat At The Table"