PAY TV EXCEEDS THE BARRIER OF THE 7.2 MILLION SUBSCRIBERS IN SPAIN

According to statistics from the Comisión Nacional de los Mercados y la Competencia (CNMC), 88% of Spanish users had the service contracted in packaged form. 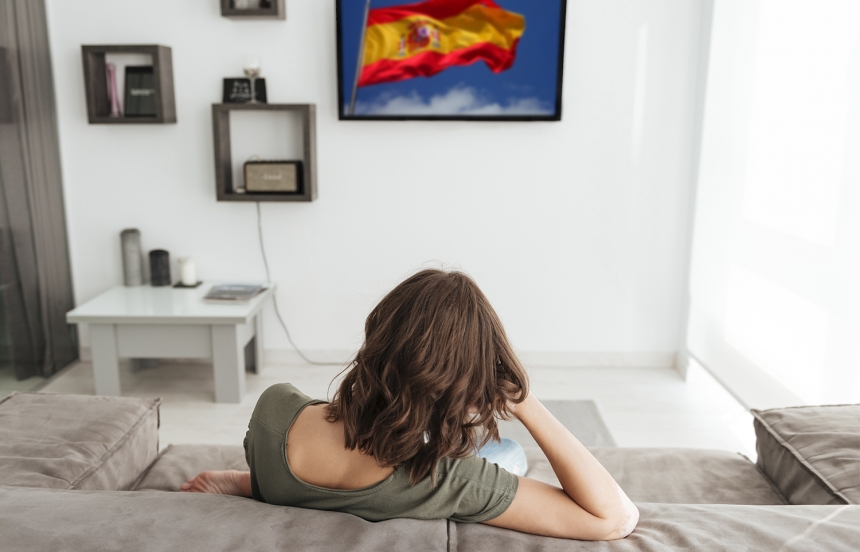 Pay TV continues to expand throughout Spain and, for the first time, it exceeded the barrier of 7.2 million subscribers at the end of 2019, after growing by 6.4% compared to the Q4 of 2018. According to statistics from the Comisión Nacional de los Mercados y la Competencia (CNMC), 88% of Spanish users had the service contracted in packaged form.

The two technologies with the most users were IPTV (Internet television) - which is offered through fiber and xDSL networks - with 4.7 million subscribers, and cable TV, with 1.3 million. Instead, the drop in subscribers to satellite TV continued, decreasing to 554,000 subscriptions. 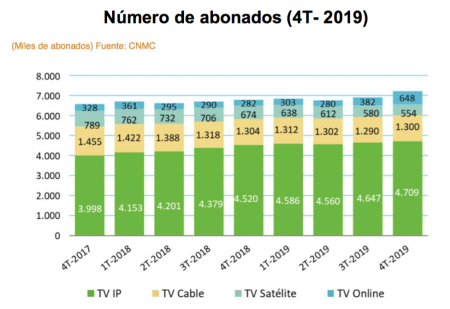 Traditional television revenues have remained constant, while pay TV continues to grow. Thus, between October and December 2019, free TV received €521 million euros, practically unchanged from the same period of the previous year (0.1% less). On the contrary, the turnover of pay TV continued to grow, surpassing traditional TV and registering revenues of €564.6 million after growing by 2%.

Analyzing the income according to the different ways of transmission or technology of pay TV, the evolution remained practically the same as in previous periods: IPTV (television transmitted by xDSL or FTTH networks through a reserved width) and Online TV (OTT pay TV accessed with username and password) grew, while satellite TV and cable TV fell. 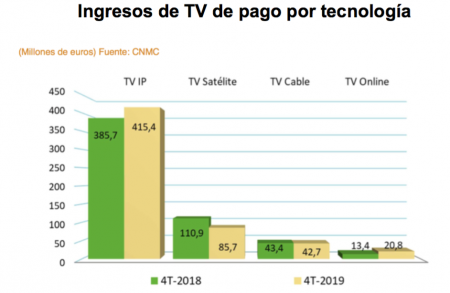 The two main television groups, Mediaset and Atresmedia, jointly accumulated 81.7% of TV advertising revenues. This percentage is even higher and rises to 87.5% if the free television segment is taken into account. 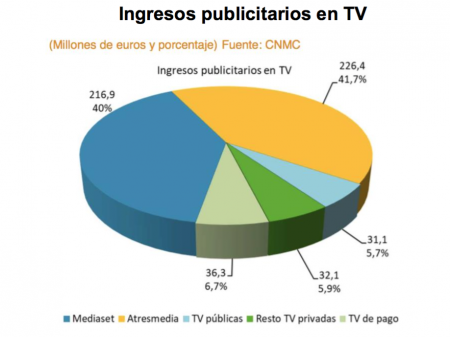 Between October and December 2019, the average consumption of television stood at 3 hours and 31 minutes (211 minutes) per person and day. This data reflects an increase of 29 minutes per viewer/day compared to the previous quarter and a decrease of 8 minutes compared to the same quarter of 2018.

The statistical data refers to the fourth quarter of 2019 and, evidently, is lower than that recorded during the confinement by Covid-19. In March 2020, due to quarantine, the average daily consumption has been 4 hours and 44 minutes per person, 51 minutes more than in the same month of the previous year and one hour and thirteen minutes more than in December 2019. 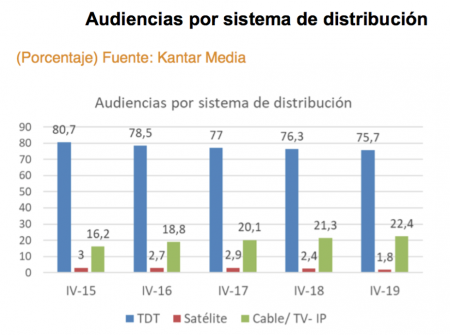 The quarterly audience share was led by Mediaset with 29.4%, followed by Atresmedia with 25.5%. Although Mediaset recovered positions compared to the fourth quarter of 2018 (+0.9 points), Atresmedia lost them (-1.8 points).