Disney continues to lead the American entertainment industry in corporate demand share, and Disney+ has become the third most in-demand platform for original content in the United States and around the world, according to Parrot Analytics. 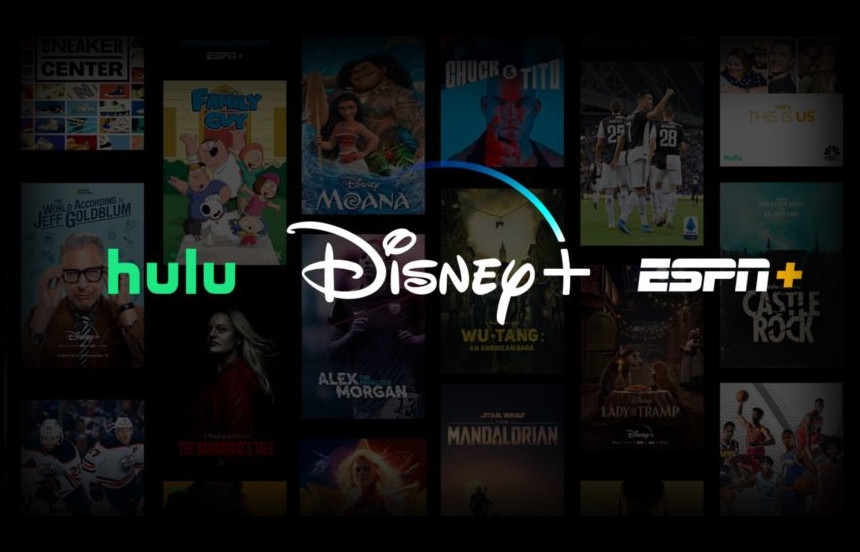 Disney continues to lead the American entertainment industry in corporate demand share, and its streaming service Disney+ has become the third most in-demand platform for original content in the United States and around the world, trailing the far more established Netflix and Amazon Prime Video, according to Parrot Analytics.

Nevertheless, Disney+’s share of demand for on platform content - a measure of demand for both original and licensed series - is severely lacking. But fellow Disney-owned platform Hulu makes up for Disney+ here, with the highest on platform demand share in the United States, ahead of even Netflix.

Original and exclusive licensed content are key to drawing in new subscribers. Disney+ is thriving with originals demand, while Hulu leads in the United States in exclusive licensed demand. “The two make a potent one-two punch luring in new subscribers with Marvel and Star Wars content on Disney+, while retaining them with Hulu’s deep library of classic series,”  Parrot said.

Disney is far ahead of the competition in corporate demand share, a consolidation of original demand where platforms are combined based on their corporate parent to show where audience attention is ultimately going. 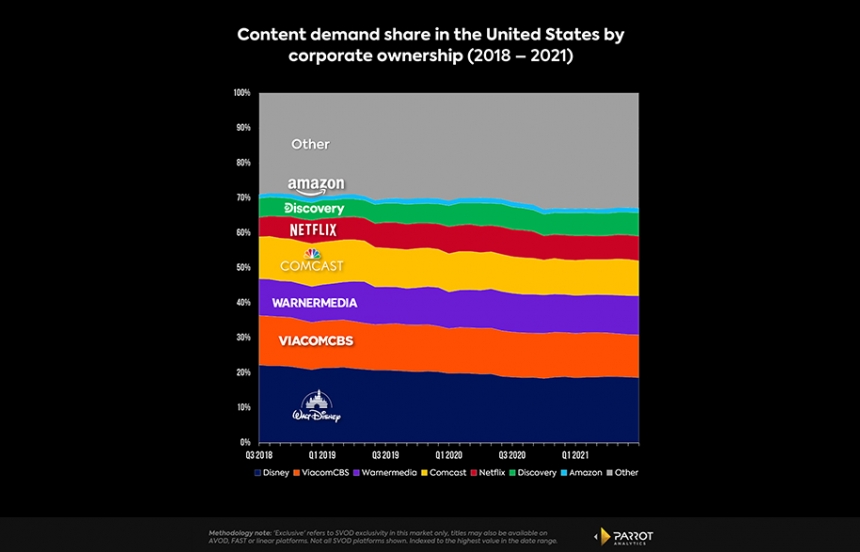 In Q2 2021, Disney (18.9%) was the dominant media corporation in this category, trailed by fellow legacy media outlets ViacomCBS (12.3%), WarnerMedia (11%) and Comcast (10.3%). This does represent a decline from three years ago, when Disney had 22.1% of corporate demand share in Q3 2018, as increased competition has impacted all of the major players.

With WarnerMedia and Discovery merging, they will serve as a major threat to Disney’s lead in the category. In the second quarter of 2021, the potential Warner Bros. Discovery conglomerate would have accounted for 17.4% corporate demand share in the United States, just 1.5% behind Disney.

Disney+ has dominated the digital original game - the key driver of subscriber growth - accounting for the top two shows by demand globally, and four of the top five in the United States in the second quarter of 2021. All three Marvel series released this year became the most in-demand shows in the world within two weeks of launching, and Disney+’s original flagship series “The Mandalorian” continues to draw exceptional worldwide and US demand despite not launching a new episodes since December 2020. 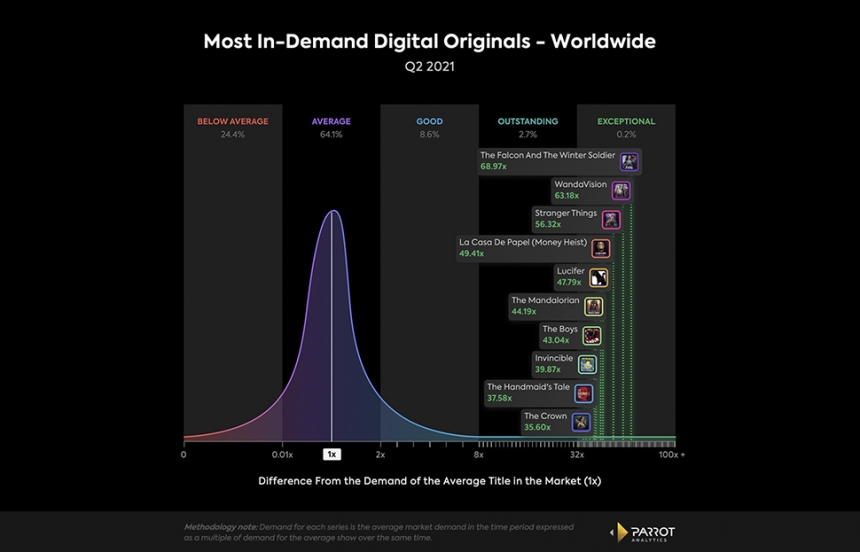 Disney+’s three series in the top 10 digital originals worldwide in Q2 2021 were second only to Netflix, which had four. Marvel series “The Falcon and The Winter Soldier” was the most in-demand digital original in the world in Q2 2021, earning 69x more audience demand than the average series globally during the quarter. Fellow Marvel original “WandaVision” came in second place with 63.2x more demand than the average show worldwide. 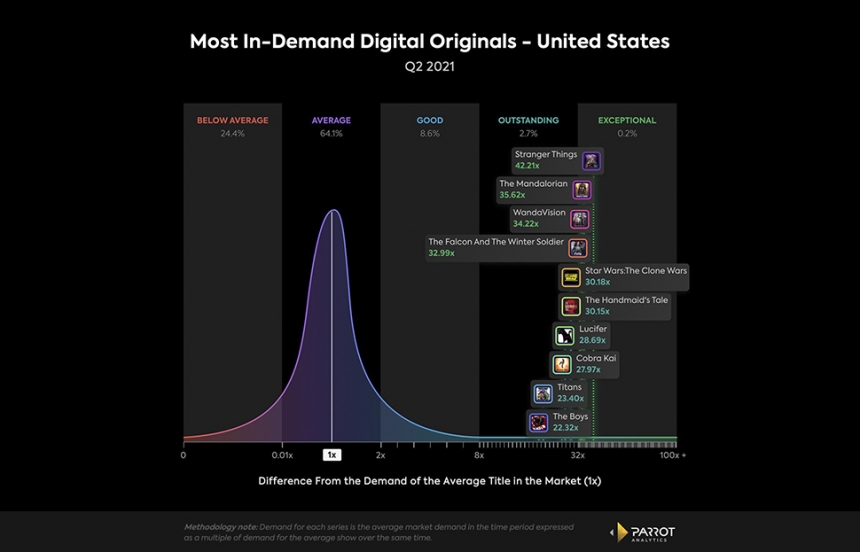 While Netflix had the top digital original in the United States for the quarter, Disney+ accounted for an incredible four of the top five series. The performances of “The Mandalorian” (35.6x), “WandaVision” (34.2x), “The Falcon and The Winter Soldier” (33x), and “Star Wars: The Clone Wars” (30.2x) demonstrates how successful Disney+ has become at leveraging Disney’s pre-existing IP and translating the previous success of Marvel and Star Wars films into the streaming era.

“The performance above also suggests that Star Wars may be more of a hit in the United States than globally, while the opposite is true for Marvel. With a relative slowdown in Star Wars content, Disney+’s upcoming heavy Marvel slate looks poised to capture additional international demand and subscriber growth,”  Parrot noted. 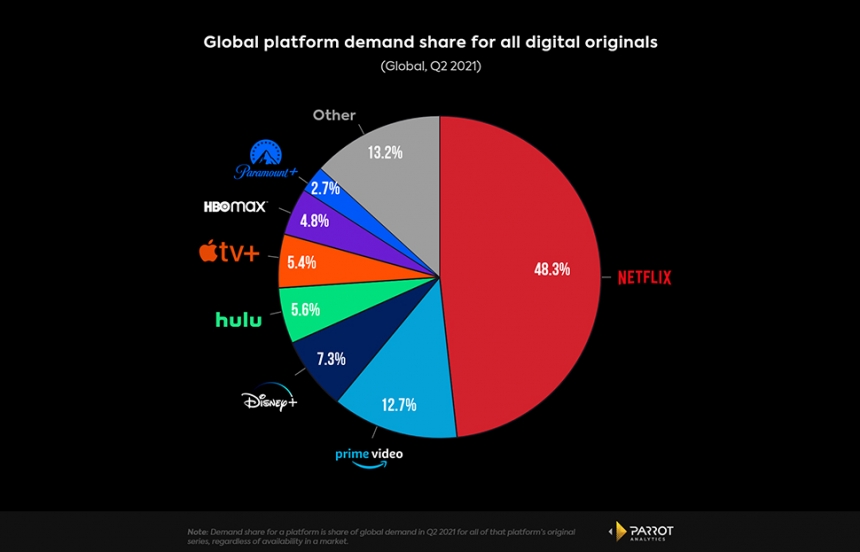 Disney+ grew from 6.0% in Q1 2021 to 7.3% in Q2 2021 globally on the back of its original Marvel content, with “The Falcon and the Winter Soldier” concluding and “Loki” premiering in the second quarter. Compared to Q2 2020 (3.4%), Disney+ has more than doubled its global digital original demand share. Disney+ and Hulu combined (12.9%) would just beat out Amazon Prime Video (12.7%) for second place globally, showing the power of the Disney bundle. 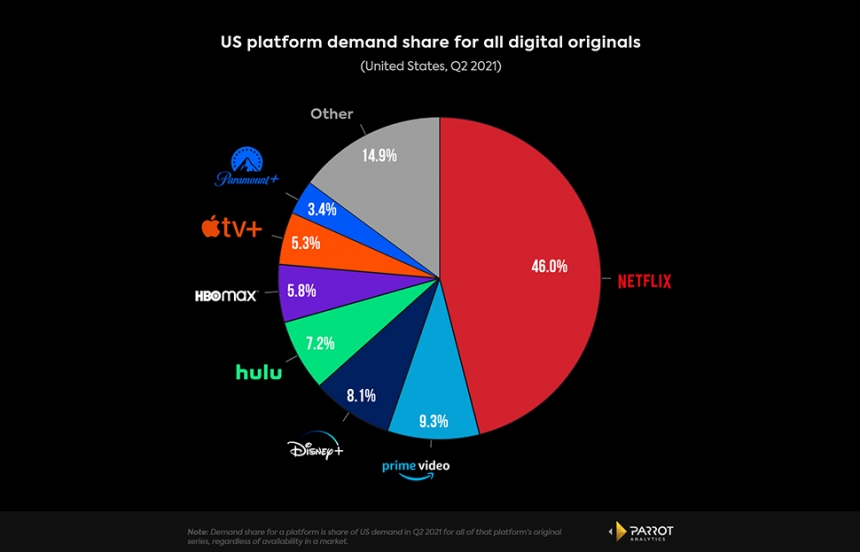 Sitting just 1.2% behind Amazon Prime Video, Disney+ could soon become the second biggest streaming service in the United States in terms of demand for original content. However, combining the demand share of Hulu and Disney+ would give the bundle 15.3% digital original demand share, easily surpassing Prime Video for second place. 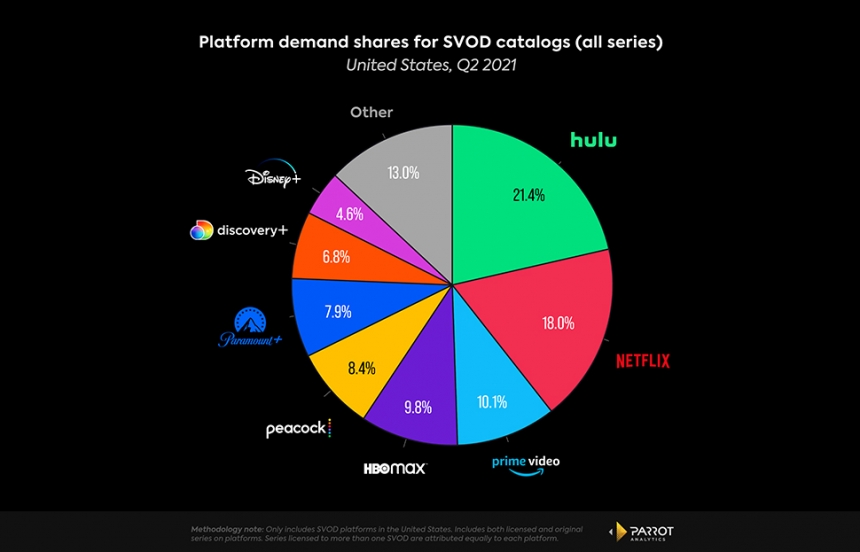 In terms of total demand for all content available on a platform, Disney+ falls to eighth place among US streamers, with 4.6% share, significantly behind relative newcomer Discovery+. This chart reveals the importance of the other major asset in Disney’s bundle - Hulu.

While Hulu does have its share of hit originals, this long-established service is better known for housing highly in-demand older content from multiple sources, designed to retain the subscribers that Disney+ brings in with its worldwide original hits. While the majority of demand for Hulu’s on-platform content is non-exclusive, it still houses more exclusive licensed content demand than any other streamer, beating out Netflix and even HBO Max, which of course has the entire HBO library. 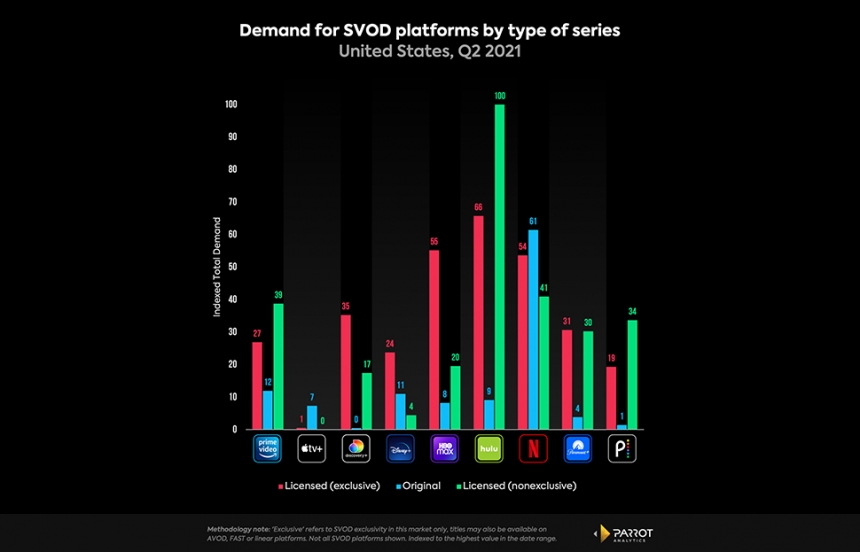