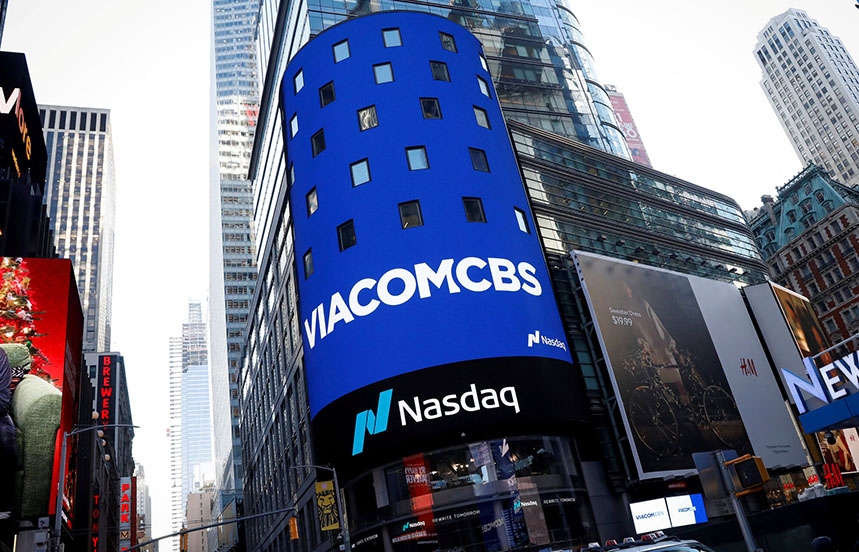 Because of the boost, ViacomCBS revised its subscriber projections and now expects 100 million global subscribers between the two services by the end of 2024. That’s up from projections of 65-75 million made a year ago. "In the fourth quarter, you saw the power of strategy and strength of execution across the company. Our success was evident across all lines of business and spotlighted by streaming, where we achieved our best quarter ever in streaming subscription growth - more than doubling our subscriber additions from last quarter with a record 9.4M additions, expanding our total global streaming subscribers to over 56M. And, to top it off, we saw a meaningful acceleration in our global Pluto TV MAUs, to reach over 64M and generate over $1 billion in revenue in the year. This sets us up well for 2022, where I'm tremendously excited to continue to build on this powerful momentum - investing in global content, distribution, and market expansion - to further drive scale," Bob Bakish, President & CEO at ViacomCBS, stated during the company's Hosting Virtual Investor Event.

Around the TV business, in Q4, CBS had the top scripted broadcast drama with "NCIS," the top comedy with "Young Sheldon," and the top three new programs with "FBI: International," "NCIS: Hawai'i" and "Ghosts." Also, "THE NFL ON CBS" averaged over 18 million viewers, more than any prime-time television sports, entertainment, or news series on any network this season. Revenue grew 18% year-over-year, reflecting growth across all revenue streams. Advertising revenue increased 2% year-over-year, primarily reflecting improved pricing and an increase in original programming, partially offset by lower political advertising. In Q4, ViacomCBS maintained leadership as the leader portfolio in the share of viewing among key demos (P2+, P12-17, P18-34, P18-49, P25-54) and owned the first cable series with "Yellowstone" and the first cable series among K2-11 with "Paw Patrol."

Showtime also had a record quarter with sign-ups and engagement, benefiting from hit originals, including "Dexter: New Blood" and "Yellowjackets." SkyShowtime, the new streaming joint venture with ViacomCBS and Comcast, plans to launch in more than 20 European markets encompassing 90 million homes starting later this year. Pluto TV revenue grew 45% year-over-year to $362M, as additions of 10M grew total MAUs to over 64M in the quarter. Pluto TV launched in Italy and announced a strategic partnership with Nordic Entertainment Group to bring Pluto TV to Sweden, Denmark, and Norway in 2022.

Finally, around the film business, ViacomCBS' Revenue rose 61% year-over-year, driven by higher theatrical and licensing revenues. Theatrical includes revenues from the fourth-quarter release of "Clifford The Big Red Dog" and the third quarter release of "PAW Patrol: The Movie." At the same time, the prior-year period was impacted by the closure or reduced capacity of the movie theaters in response to Covid. Licensing and other revenue increased by 54% year-over-year, driven by a higher licensing volume, including owned streaming services and from the comparison against the impact in 2020 from Covid-related production shutdowns.

ANALYSIS
As ViacomCBS reported its latest earnings, Parrot Analytics has found strong demand for the conglomerate’s overall catalog, rising demand for both original and on-platform content for Paramount+, but missed opportunities in leveraging its most beloved content for streaming dominance. 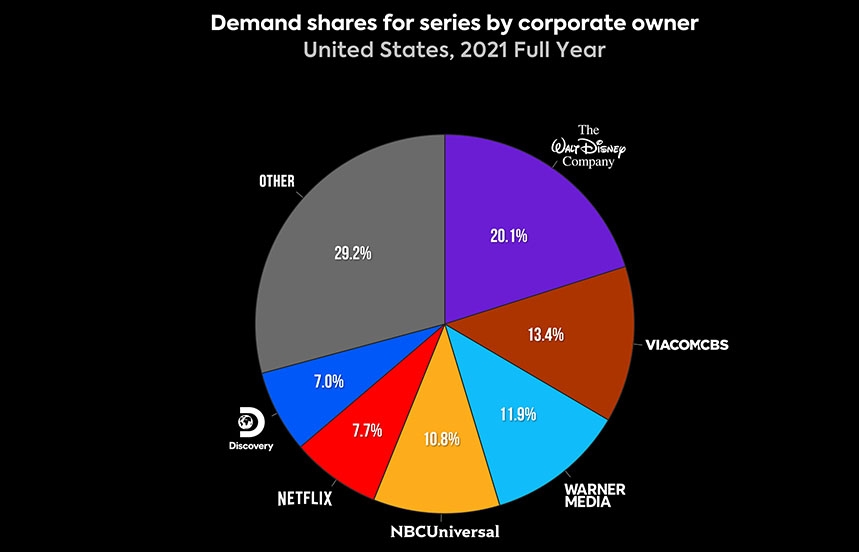 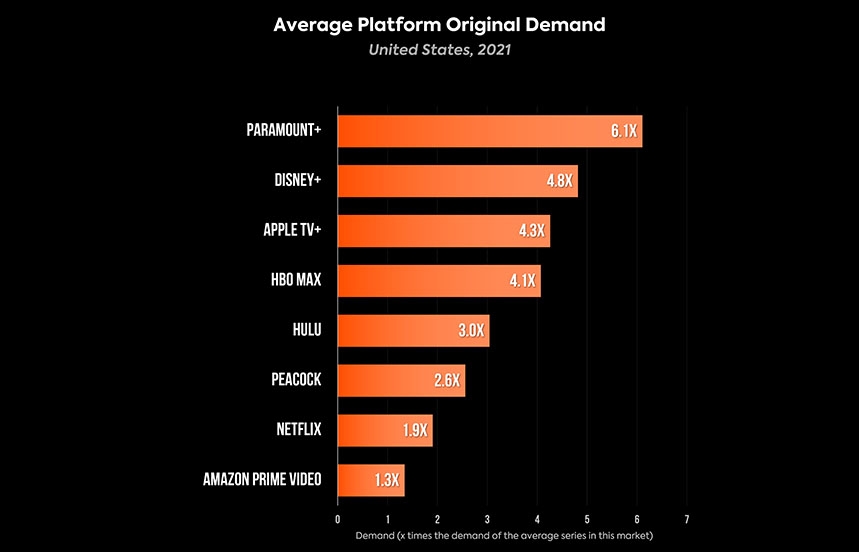 Parrot states that ViacomCBS remains in a solid second place in corporate demand share (13.4%), far behind Disney (20.1%) but ahead of fellow legacy media brands WarnerMedia (11.9%) and NBCUniversal (10.8%) for the year 2021. However, Paramount+ was in seventh place in US originals demand share (4.2%) in 2021 and fifth place in US on-platform demand share (8.4%) as of Q4 2021. If ViacomCBS wants to be a leading player in streaming, they must exclusively place this highly in-demand content catalog onto Paramount+. Demand for original and exclusively licensed content is a key leading indicator of subscriber growth for SVOD platforms.

One thing that is clearly working for Paramount+ is the "Star Trek" franchise. "Star Trek" originals on Paramount+ accounted for 36.6% of the demand for Paramount+ Originals in 2021. By comparison, Marvel shows made up 38.6% of Disney+ Originals demand, and Star Wars series accounted for 30.1% of Disney+ Originals demand for 2021. Paramount+ did have the highest average demand per original series of any of the major SVODs with US audiences in 2021. However, a ‘quality over quantity’ approach might not be a winning strategy in today’s media ecosystem, where efforts to scale up trump everything else. 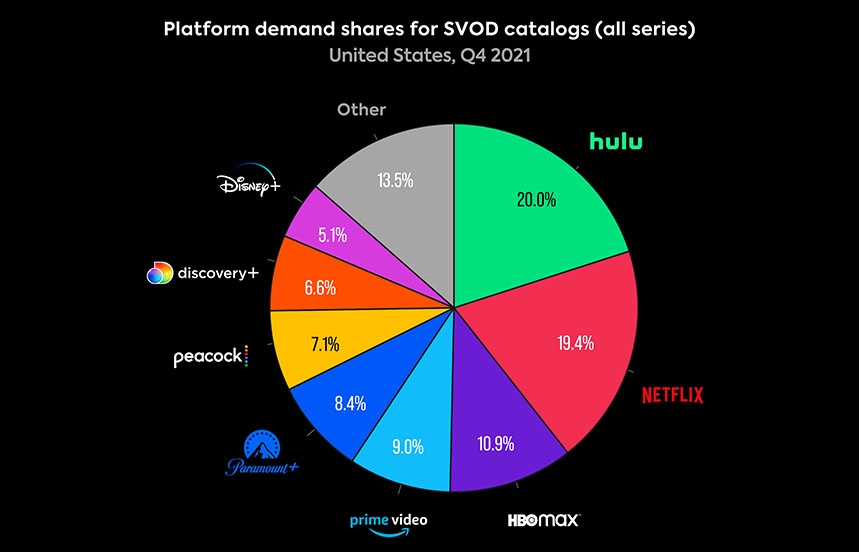 When considering the demand for an SVOD’s full catalog (including digital originals and licensed content) Paramount+ held an 8.4% share in the category for Q4 2021. Likely helped by the new "South Park" episodes exclusively available on this platform, this was a decent increase over its share in Q3 2021 (8%). Paramount+ closed the distance between it and Amazon Prime from 1.5 percentage points to 0.6 percentage points in just one quarter. Nevertheless, Paramount+ has less than half the demand share of leaders Hulu (20%) and Netflix (19.4%). Pulling back top CBS shows from Netflix such as "NCIS" and "Criminal Minds" and making them exclusive to Paramount+ would help bridge this gap.