Somos Films co-production with Digivision Producciones and GPL Comunicaciones was nominated for Best Ibero-American Film at the 35th edition of the prestigious Spanish-language film industry awards. 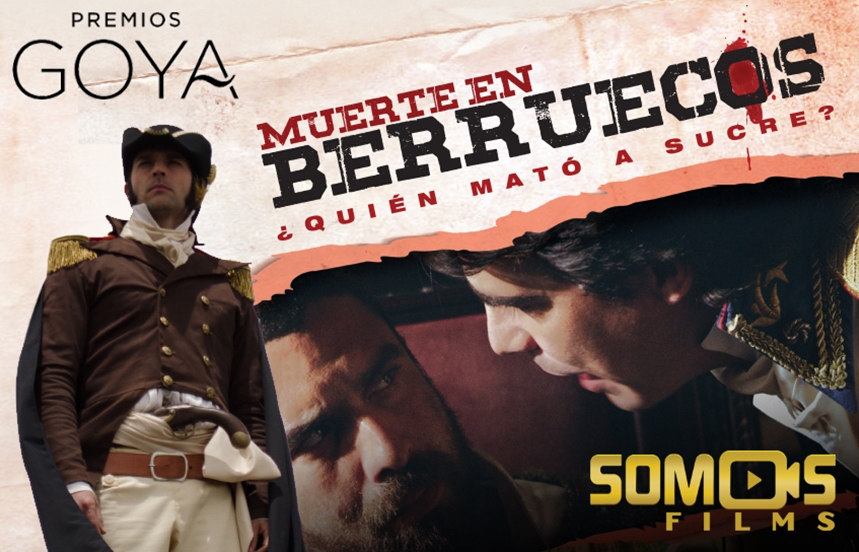 "Muerte en Berruecos, Crónicas de un Magnicidio", a co-production by Somos Films from the United States, along with Digivision Producciones from Venezuela and GPL Comunicaciones from Ecuador, will compete for the Goya nomination for Best Ibero-American Film at the 35th edition of this prestigious award of the Spanish film industry. The film has been presented to represent Ecuador in this category and will compete with 15 other Ibero-American films and documentaries.

"Muerte en Berruecos, Crónicas de un Magnicidio" is the fourth co-production of the feature film production company chaired by Luis Villanueva and part of Somos Group. The film has been nominated for several international awards and featured in special screenings around the world. Its world premiere was in Ecuador thanks to the Ecuadorian producer Gonzalo Ponce who organized the premier in Quito.

"Muerte en Berruecos, Crónicas de un Magnicidio" narrates in a “thriller” format the conspiracy that resulted in the death of General Antonio José de Sucre, one of the main officers under the command of Simón Bolívar, El Libertador. Sucre died of a gunshot in the jungle of Berruecos, in an ambush possibly organized by the General Commander of Cauca, José María Obando. The film is set in the mid-nineteenth century and follows in the footsteps of Captain Alejandro Godoy to discover the events that led to the murder of Antonio José de Sucre. Convinced that much of the file has been destroyed, Captain Godoy decides, risking his own life, to reopen the mysterious case, perhaps in search of a political conspiracy of the highest level. The story is set between Venezuela, Panama, and Ecuador. The film is directed by Caupolican Ovalles, a Venezuelan director, and starred by Luis Gerónimo Abreu.

This participation in the Goya Awards becomes a new achievement for Somos Films, a company that despite its recent creation, is beginning to put its mark on film production. Luis Villanueva, President, and Ceo of Somos Films stated: “We are very proud of this new accomplishment from Muerte en Berruecos’s team by competing in the Goya Awards for Ecuador. The film is a sample of the cinema that we produce at Somos Films, which in this case seeks to frame a historical event within a genre of great interest to the audience. We congratulate Caupolicán Ovalles and the production team.”

Caupolicán Ovalles, for his part, expressed his satisfaction: “I am very proud that this Ecuadorian, Venezuelan and American co-production has been selected by Ecuador for the 35 Goya Awards as best Ibero-American film, it is a period police thriller based on real facts, which has not yet been solved, was the first Assassination in the Ibero-America area, since then, history will be in charge of presenting us with a long list of political crimes marked by the ambition for power. I thank Somos Films for their invaluable participation in this co-production that strengthens the cinematographic integration of the region by sponsoring Hispanic productions for the whole world.”