Globo and Côte Ouest reached an agreement for the environmental series "Aruanas", which will premiere on 1 September in French island territories. 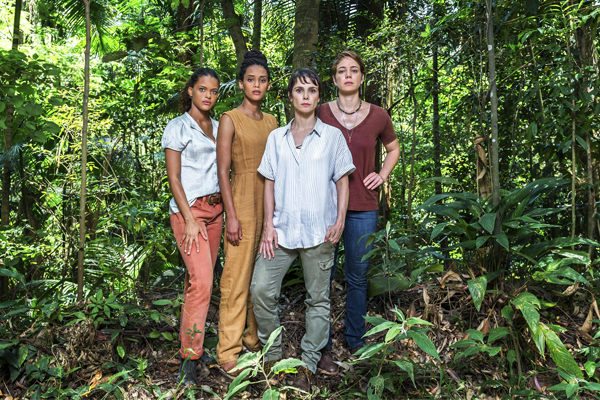 With 10 episodes, the series written by Estela Renner and Marcos Risti, with collaboration by Pedro de Barros and artistic direction by Carlos Manga Jr., has the Amazonas as its backdrop and makes a connection with the global challenges on forests and climate. Freely inspired by real events, it tells the story of four women who risk their lives when investigating a gang of environmental crimes. Natalie (Débora Falabella), Luiza (Leandra Leal) and Verônica (Taís Araújo) are childhood friends and, together with Clara (Thainá Duarte), unite to defend the environment and found the NGO Aruana, name of indigenous origin which means “sentinel”.

The plot takes place in the fictional city of Cari, in the interior of Amazonas, where the reality is harsh and strange facts happen: a cry for help in the tone of anonymous denunciation, people mysteriously falling ill, murders and threats to indigenous peoples. The activists, each on their investigative path, create a mosaic of evidence that leads to a major scheme of environmental crimes involving illegal mining and a renowned national mining company.

According to Angela Colla, Head of International Sales at Globo, the arrival of the series on French TV shows the work that the company has been doing in the international market to show its series of purpose. “Globo today has a broad portfolio of products with short formats that address topics relevant to the world. And seeing a product with a theme as current as ‘Aruanas’ traveling so well through different regions shows that we’re on the right track”, says the executive.

‘Aruanas’ has already been licensed for countries like Belgium, Holland, Germany, Austria, Luxembourg and Switzerland. Last year, it was made available to more than 150 countries, in a direct-to-consumer strategy.

The series is also available through Globoplay for Brazil and the United States and was shown on international Globo channels in South America, Portugal, Europe and Africa.