"In Your Place", "A Life to Die For", "Aruanas - Season 2" and "Under Pressure - Season 4" are the big launches for the international market. 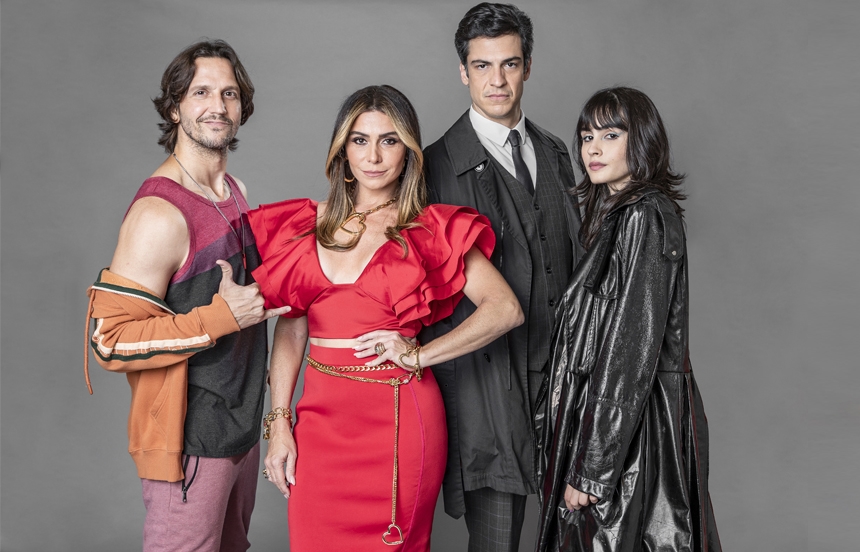 Globo, the largest Brazilian producer of audiovisual content in Latin America, starts 2022 presenting news to the international market. Among the releases, audience hits on Free TV and streaming, are the telenovelas "In Your Place", "A Life to Die For “, the second season of the Globoplay Original Series "Aruanas", and the fourth season of the series "Under Pressure". The new productions, exciting stories full of drama, romance and humor, will be also shared in an exclusive interview with Pablo Ghiglione, Sales Manager for Latin America at Globo, which is available on Globo International Distribution's LinkedIn page.

Aired in Brazil during primetime, "In Your Place", a telenovela created and written by Lícia Manzo (the same author of the international hit "The Life We Lead") and directed by Maurício Farias, tells the story of twins Christian and Renato (played by Cauã Reymond from "Avenida Brasil"), who were separated as babies and were raised in totally different realities, unaware of each other's existence. Christian grows up in an orphanage and struggles with underemployment to survive. Renato, on the other hand, was adopted by a rich family and had everything money can buy. As adults, fate brings them together again. But when they finally meet, tragedy strikes and Renato dies. With this, Christian sees a unique opportunity and decides to take his brother's place, leaving behind his identity and a great love. In his new life, success and social status transform him into a new person. It’s a story of psychological drama filled with romance and emotion, dealing with intense human and family conflicts.

"I watched a documentary about young people who, upon coming of age, must leave the juvenile shelter where they were raised. I remember being moved by the testimonies of these young people: some of them dreamed of becoming lawyers, doctors, engineers, and so on. At 18, they were alone in the world, left to their own devices. Even so, they dreamed of becoming somebody, of making a difference, of having a place in the sun," says Lícia Manzo about one of her inspirations for creating the story of "In Your Place". "From there, I believe, the central plot of the telenovela was formed for me: two identical twin brothers, separated at birth. One of them, Christian, sent to a shelter. The other, Renato, was adopted by a wealthy couple. By bringing them to the center of the plot, or more than that, by merging them into one (to the extent that the first will take on the life and identity of the second), issues such as integrity, ethics and social inequality are raised in the telenovela, not from a statistical or factual point of view, but from an intimate, subjective and human one", he adds.

Another launching from Globo is "A Life to Die For", created and written by Mauro Wilson, winner of two International Emmy Awards for the series "Sweet Mother" and "The Invisible Woman", and directed by Allan Fiterman, also winner of the International Emmy, with the series “Hidden Truths”. The telenovela is a romantic comedy, light and fun for the whole family, and about living intensely, telling the story of four characters: the ambitious businesswoman Paula (Giovanna Antonelli, from "The Clone"), the soccer player Neném (Vladimir Brichta, from "A Second Chance"), the snobbish doctor Guilherme (Matheus Solano, from "Trail of Lies") and the rebellious pole dancer Flávia (Valentina Herszage, from "The Big Catch"), each with their own life very different from the other and who, in a plane crash, will see their lives interconnect. When they reach the sky, Neném, Paula, Guilherme and Flávia discover that their death was a mistake and they are given a second chance by Death to change the course of their lives, but with the warning that in one year one of them will really die. So they begin a race against the clock to fix what is wrong in their lives and try to change their fate. And, little by little, they discover that the fact that they died together was no mere coincidence.

"The telenovela is a romantic comedy. All the characters are in search of love. The plot is about not being sure of anything, but in the blink of an eye everything can change. These four are the main characters, but the other characters in the telenovela are also trying to find each other and trying to settle their fate", explains Mauro Wilson, scriptwriter for sitcoms and humor programs who is making his debut as a telenovela author.

Besides successful telenovelas, the new seasons of the series "Aruanas" and “Under Pressure" are also among Globo's new productions for the international market.

Created by Estela Renner and Marcos Nisti, with artistic direction by André Felipe Binder and direction by Mariana Richard, the second season of the Globoplay Original Series "Aruanas" begins with the NGO run by Natalie (Débora Falabella, from "Avenida Brasil") and Luiza (Leandra Leal, from "Empire") facing a series of problems, including a serious financial crisis and the removal of Verônica (Taís Araujo, from "A Mother’s Love"). This season, they fight to prevent the publication of a Provisional Measure that will exempt from taxes the largest oil companies in Brazil. To do so, they start an investigation in the fictitious town of Arapós, a large petrochemical complex in Brazil that, after an environmental tragedy, was transformed into a symbol of sustainability. The NGO's challenge now is to find out what lies behind the aura of the model city.

A great international success, the first season of the eco-thriller was licensed for several territories such as Portugal, France, Croatia and Belgium. In the new season, the protagonists fight against a silent epidemic that claims thousands of early victims worldwide and costs international economies billions: urban pollution. "Aruanas" is a Globoplay Original Series developed by Globo Studios, in co-production with Maria Farinha Filmes.

The world will also fall in love with the emotions of the fourth season of the medical drama "Under Pressure". In the series, after facing intensely the fight against the pandemic at the head of a campaign hospital against COVID-19, doctors Evandro (Julio Andrade, from "Above Justice") and Carolina (Marjorie Estiano, from "The Life We Lead") join the team of the largest public hospital in Rio de Janeiro. In parallel to the chaotic routine of a public emergency room and the serious cases of patients, the protagonists are faced with a dilemma in their personal lives. The arrival of Evandro's ex-girlfriend with a baby at the hospital causes a whirlwind of emotions in the lives of both, who must face new family-related issues.

Aired with great success on Free TV in Brazil and with the first seasons licensed to over 70 countries, “Under Pressure” is a co-production of Globo and Conspiração, written by Lucas Paraizo with Márcio Alemão, André Sirangelo, Pedro Riguetti, and Flavio Araujo, with artistic direction by Andrucha Waddington, Mini Kerti, Rebeca Diniz, Julio Andrade, and Pedro Waddington. The series already has its fifth season confirmed and will be produced by Globoplay.

In addition to the four launches, in 2022 Globo is preparing other new productions, such as the awaited remake of the great success "Pantanal", and the romantic plot "A Trick of Fate".

Starring Juliana Paes and a cast composed of great names of Brazilian drama, "Pantanal" is a successful telenovela created more than 30 years ago by Benedito Ruy Barbosa, who also wrote "The King of the Cattle" and "Terra Nostra". The new version, written by Bruno Luperi, with artistic direction by Rogério Gomes (from "Empire" and "Edge of Desire"), is about a family saga that has love as the thread that conducts the dramas between Joventino, his son José Leôncio, and Juma Marruá, who will be the character that highlights nature as the main protagonist of the whole plot.

The exciting "A Trick of Fate ", on the other hand, is a story that will center on the love story of the young magician Davi (Rafael Vitti) and the fashion designer Isadora (Larissa Manoela), who will fall in love in times of profound changes for Brazil in the 1930s and 1940s. A story written by Alessandra Poggi, and with artistic direction by Luiz Henrique Rios (responsible for successes like "Totalmente Dreamer" and "A Life Worth Living").

Besides new telenovelas, the audiences can expect new seasons of big hit Globoplay Original series for this year, such as the second seasons of “We Are Five", of the police thriller "Dissident Archangel", of the supernatural thriller "Unsoul", and also the fifth season of the medical drama "Under Pressure".

"The international market pays a lot of attention to Brazilian productions for their quality, for their ability to boost and diversify strategies for different windows, in addition to strengthening engagement and interacting with different targets. Therefore, we have great perspectives with these releases, because they are contents that further reinforce our commitment to generate value for our partners and clients," explains Angela Colla, Head of International Sales at Globo.