WITH PREMIER LEAGUE RIGHTS, AMAZON IS THE FASTEST-GROWING STREAMER IN THE UK 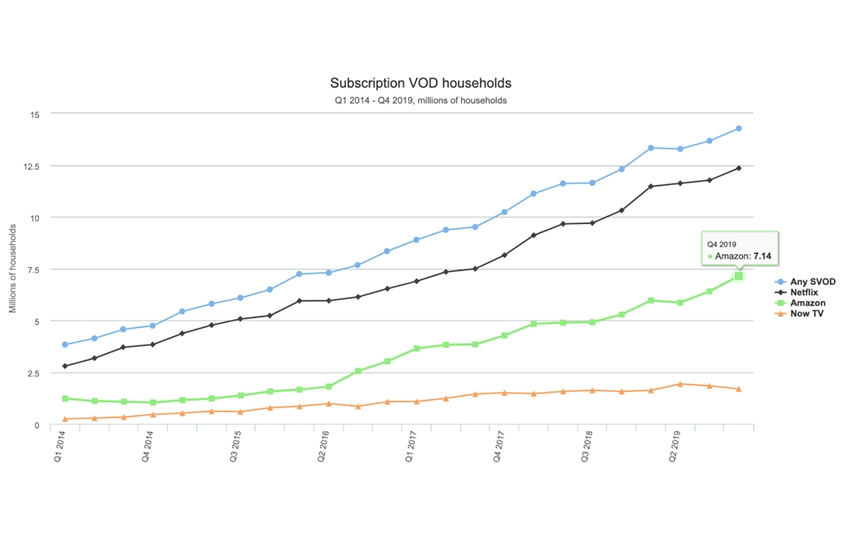 Amazon Prime Video became the fastest-growing streamer in the UK in the final three months of 2019 after broadcasting Premier League football for the first time. The streaming service embarked on a giant marketing push to promote its Premier League coverage, which coincided with two of Amazon’s biggest deal days: Black Friday and Cyber Monday. The events propelled Amazon Prime Video to 7.14M subscribers in Q4 last year, according to BARB, Britain’s foremost TV audience measurement body. That was up 35% on the same period in 2018, when Amazon had 5.28M subs.

The TV measurement firm’s SVOD homes tracker showed that by the end of 2019, 14.27 million UK homes had accessed at least one subscription video-on-demand service, a quarter-on-quarter increase of almost 600,000 homes (4.4%) since the third quarter of 2019. The data also showed that in Q4 2019, 6.03 million UK homes, just over a fifth of the country’s households, subscribed to two or more SVOD services, up 1.72 million year-on-year.

Amazon Prime Video was the fastest growing service year-on-year, increasing by just over 35% versus the fourth quarter of 2018 to 7.14 million homes. The service saw its investment in digital rights for two match days’ worth of English Premier League football pay off spectacularly. Yet despite this impressive growth, Netflix remained the largest service with 12.35 million homes subscribed, a year-on-year growth of almost 20%. Sky-owned NOW TV saw almost 8% year-on-year growth, bringing it to 1.69 million UK homes in Q4 2019. That said BARB added the caveat that NOW TV also experienced an 8% quarter-on-quarter drop from 1.84 million in Q3 2019.