Netflix is still the dominant player in the worldwide streaming game, but its global and US digital original demand share have shrunk to record lows in the first quarter of 2021 due to rising competition. 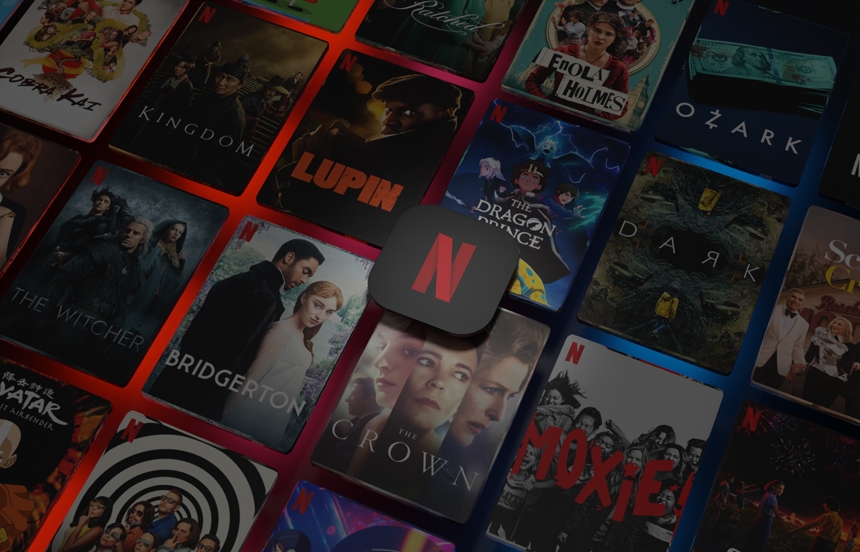 Netflix is still the dominant player in the worldwide streaming game, but its global and US digital original demand share have shrunk to record lows in the first quarter of 2021 due to rising competition from the likes of Disney+, Apple TV+, HBO Max, and more, according to new data from Parrot Analytics.

On Tuesday, the streaming giant reported it added 2 million less subscribers than it expected between January and March. Globally, Netflix added 4 million accounts in Q1, bringing the company to 207.6 million subscriptions overall. This numbers came in below the 6 million new accounts the company projected for the period.

“As we have noted previously, the production delays from Covid-19 in 2020 will lead to a 2021 slate that is more heavily second half weighted with a large number of returning franchises. And while the roll out of vaccines is very uneven across the world, we are back up and producing safely in every major market, with the exception of Brazil and India. Assuming this continues, we will spend over $17 billion in cash on content this year and continue to deliver an amazing range of titles for our members with more originals this year than last,”  said the company in its letter to shareholders.

Nonetheless, according to Parrot, the clearest leading indicator of subscriber growth is growth in total demand for original content. In this regard, Netflix looks good, as the total global demand for its original content has grown 62% over the last two years (Q2 2019 to Q1 2021).

However, total global demand for original content on all other platforms grew 131% over the same time period, which helps explain the following data about Netflix's global and US demand share.

Netflix’s global digital original demand share hit its lowest quarterly number ever, barely cracking a majority at 50.2% in Q1 2021 - down from its 53.5% demand share for the full year 2020. This is a landmark event, considering the platform’s entrenched dominance in the industry, and the fact that just two years ago (Q1 2019) its global demand share was at 64.6%.

Netflix’s declining demand share highlights the rapid maturation of the worldwide and US streaming markets since 2019. It is also a testament to the remarkable success of the many new entrants to the “Streaming Wars” over the last 18 months in creating in-demand original content and carving out a niche at the expense of Netflix.

Most notable has been the surge of Disney+, moving up to 6.0% worldwide demand share for the first quarter of 2021 from just 3.6% share for the full year 2020, largely on the back of its two new Marvel series.

For the second straight quarter, Netflix’s digital original demand share has fallen below a majority in the United States, another sharp decline from two years ago when the streamer had 63.1% US demand share in Q1 2019. Netflix’s US share of digital original demand has been on a downward trajectory each month this quarter, ending with a 47.6% share in March in the US.

Disney+’s trajectory has followed an almost inverse path from Netflix, up each month in the first quarter of the year. In fact, it has risen to 7.0% US digital original demand share, up from 5.4% for full year 2020. This period saw the debut of Disney+’s highly anticipated slate of Marvel content, including the full run of smash hit “WandaVision” and the first two episodes of “The Falcon and The Winter Soldier”.

However, despite all the headlines and attention for Disney+’s tentpole Marvel series, Netflix's “Cobra Kai” was the most in-demand digital original series in the United States in the beginning of this 2021. Moreover, seven of the top 10 original series globally in Q1 were Netflix originals (compared to 5 in the top 10 in the US). 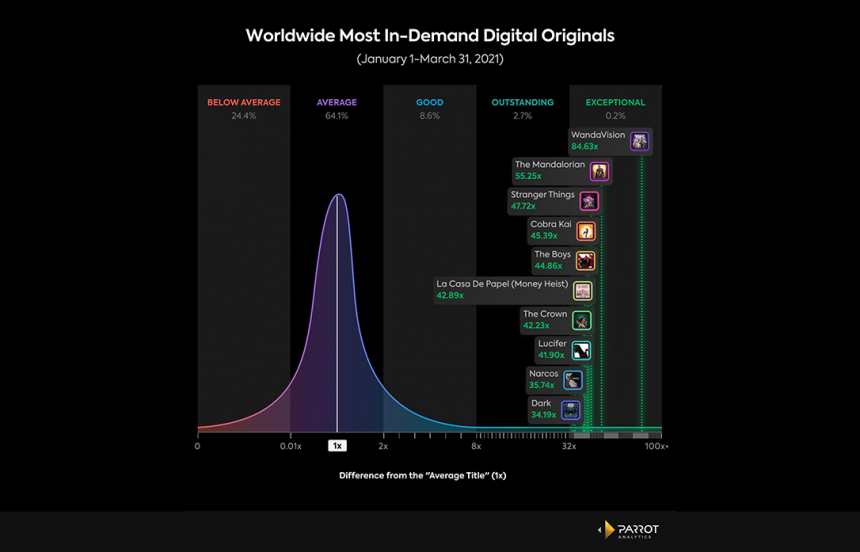 Netflix’s increasing emphasis on producing and promoting non-US and non-English language originals (particularly “Dark” and “La Casa de Papel”) is clearly paying off with global audiences. This is seen in Netflix having more digital originals in the global top ten, and in Netflix having a higher global digital original demand share (50.2%) than its US demand share (48.1%).

●  A SIMILAR PATTERN IN THE NORDIC COUNTRIES

Based on the ongoing Mediavision consumer analysis, the Netflix Q1 subscriber figures for the Nordic market show a year-on-year growth of 5%. This corresponds to approximately 200.000 new subscribing households since Q1 of last year. According to Mediavision analysis, Netflix now has approximately 4.4 million subscribing households in the Nordics. Hence, the company’s growth is lower than the overall Nordic SVOD market growth (+8% year-on-year).

The Nordic countries are all highly digitalized, partly driven by actors such as Netflix. The SVOD penetration as a Nordic average is approximately 60% in the first quarter of 2021. Mediavision analysis points at new actors taking market shares and that Netflix, albeit still the single largest SVOD service, is no longer the front runner in terms of growth. 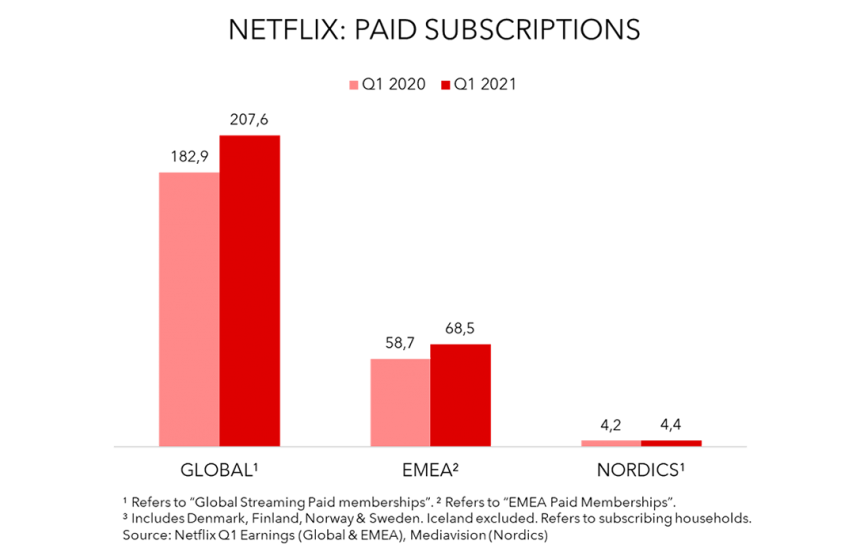