The Italian animation leading company got very positives feedbacks about its series "Leo da Vinci" in Cannes, and it was part of the organization of the first animation segment at MIA. 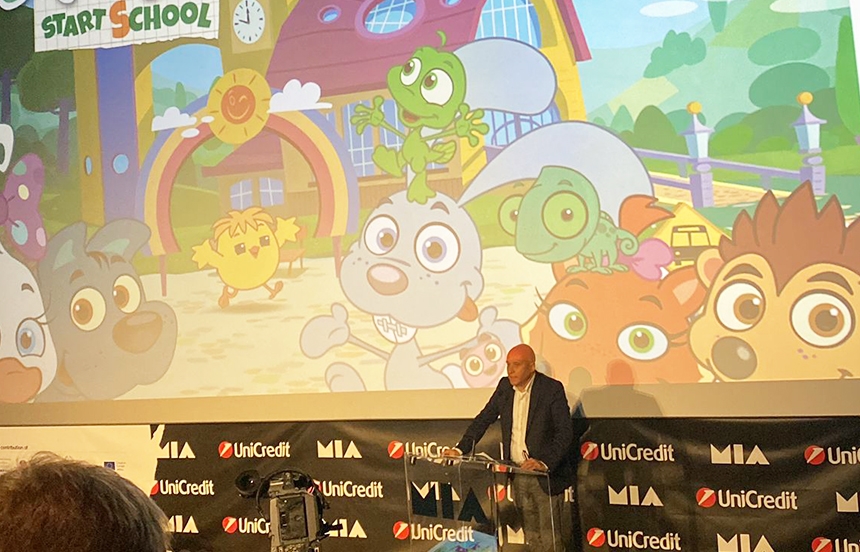 Francesco Manfio, CEO of Gruppo Alcuni during his conference at MIA

Gruppo Alcuni has finalized an intensive and relevant work week, attending Mipcom in Cannes and MIA Market in Rome in the same week. "I believe that MipJunior/Mipcom and MIA should increasingly become two complementary, rather than competing, events", asserted Francesco Manfio, CEO of the company to Señal News. "I believe, for example, that Cannes should retain and expand its role as a market primarily intended for international sales, while MIA should find its place as a forum destined to facilitating international co-productions," he completed.

In Cannes, Gruppo Alcuni has signed a co-production agreement with both Hessischer Rundfunk (HR) and Cosmos Maya Singapore for "Leo da Vinci 2" (52x13'). "As far as the first season of Leo (52x 13') is concerned, we saw great interest from new buyers. Furthermore, the TV networks that broadcasted the first season have already optioned the second one", commented Manfio.

Another great Gruppo Alcuni IP is "Mini Pet Pals Start School" which is attracting a lot of interest, and it will premiere today on Rai Yoyo and Rai Play, "We were delighted to witness two broadcasters from the same geographical area competing for our pre-school brand", said the executive. "We are also very happy with the very positive reactions we received for the brand new 'Vlady&Mirò' and for 'Simo&Rose', which continue to generate great interest", added Manfio.

The presence of so many new players on the market has also meant that there is a great demand for products, even if they are not very recent. In this, Gruppo Alcuni is very well positioned since it has a significant library with titles such as "Pet Pals", "Yet it Moves" and "Slash".

Successful Rome
Gruppo Alcuni was also part of the inauguration of the Animation segment at MIA Market. "I am pleased to have been part of the organizing committee for MIA Animation because we managed to create a very first stimulating edition. We presented about ten events, all very engaging, from a showcase on Italian animation, to a talk with directors Sergio Manfio and Enzo d'Alò, to the conversation between Sarah Muller of BBC and Luca Milano of Rai Ragazzi. So we started with the best foot forward, laying the groundwork and creating great prospects for MIA Animation 2022. We will do everything in our power to be up to the expectations of the international animation industry.", concluded Gruppo Alcuni CEO.

Gruppo Alcuni wins Best Animated Short at the 2021 International Rare Disease Film Festival with its "A Rare Friend" episode of Season 1 in the "Leo da Vinci series", created to raise youngsters’ awareness of Fabry Disease, a rare genetic condition. Commissioned by Italy’s Anderson-Fabry Association (AIAF) and Network for Rare Hereditary Metabolic Disorders, this special episode was made possible by a co-production with Rai Ragazzi and Cosmos Maya.

Rare Disease Film Festival is the first and only event of its kind in Europe, collecting and promoting the best video artwork on the subject of rare diseases and social inclusion. Taking place for a full, event-filled week in Rome during mid-October, this year’s Quality Jury was chaired by actor Gianmarco Tognazzi with four competitive categories: Best National and International Short Film, Best Docu Short and Best Animated Short.

In this Leo da Vinci special short, Fabrizio is a 21st century teen-ager filmed in live-action, who suffers from Fabry Disease. He also suffers from a lack of friends, and he has a huge admiration for Leonardo da Vinci. As Fabrizio dozes off, he time travels back to 15th century Florence as an animated character who gets to know Leo and friends in Verrocchio’s workshop.

"A Rare Friend" has also been selected by Cinekid’s Screening Club online video library for professionals, and will be available for viewing until December 31, 2021 on their platform.