Original content such as ‘Hidden Truths II’, ‘Aruanas’ and ‘Unsoul’ will be the highlights in the event, which will gather talents such actors Cláudia Abreu, Débora Falabella and Romulo Estrela, and TV host Ana Clara. 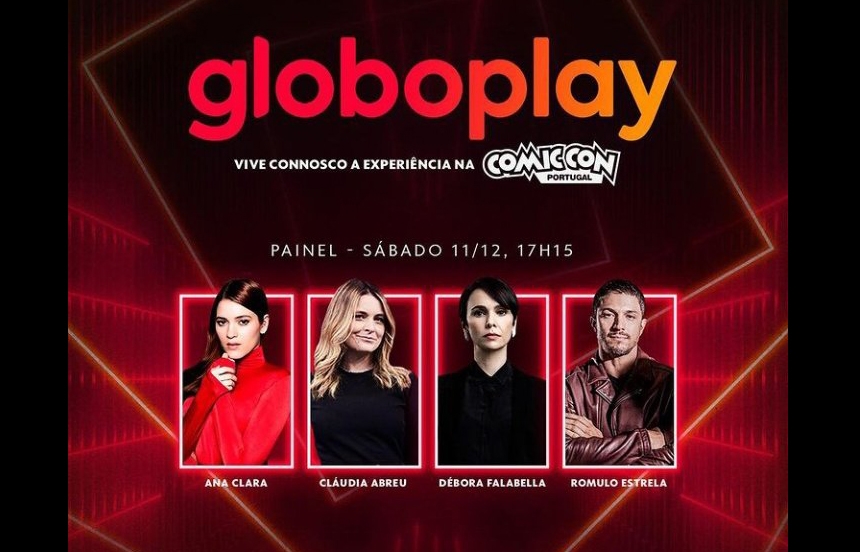 Reinforcing its international footprint, Globo will be - for the first time - present in Comic Con Portugal with its streaming platform Globoplay. Released in Portugal on the last October 14, Globoplay will count on a stand at the event between December 9 and 12 at Parque das Nações, in Lisbon, in addition to having its talented cast present in a panel for presenting its original content to the fans and to the audiences in the largest event in the industry and in Pop Culture.

On December 11, actors Cláudia Abreu, Débora Falabella, Rômulo Estrela and TV Host Ana Clara will be gathered in a panel about exclusive original Globoplay content. Cláudia Abreu is part of the cast of supernatural thriller series ‘Unsoul’; Débora Falabella is part of the cast of ecothriller ‘Aruanas’; whereas Rômulo Estrela is one of the leads in recently released telenovela ‘Hidden Truths II’. As for TV Host Ana Clara, she will represent reality show ‘Big Brother Brazil’, which, for the first time, will air in Portugal starting in 2022.

As for Globoplay’s stand in Comic Con Portugal, it will offer an immersive experience divided into three parts: a ‘Big Brother Brazil’ confession room, for simulating a vote among the reality show cast; a ‘Hidden Truths’-themed disco, where visitors will listen to the songs of the telenovela soundtrack and be filmed in 360°; and a break room, where the public can preview the platform content.

In addition to ‘Unsoul’, ‘Aruanas’, ‘Hidden Truths II’ and ‘Big Brother Brazil’, Globoplay reinforces the entire catalog available on the streaming platform for Portuguese subscribers during the event. The platform counts on over one thousand titles, between originals and classics, such as telenovelas, entertainment programs and over 3500 hours of live sport; in addition to offering six live channels, such as Globo International, Multishow, GloboNews, GNT, VIVA and sports channel.

In addition to Brazil, Globoplay has already been available in the USA since early 2020. The Brazilian streaming platform has already expanded its operation to a global level by being available in Portugal and other 15 countries in Europe, such as Germany, Spain, France, United Kingdom, Italy and Switzerland, in addition to Canada.