The Russian film industry attended DISCOP Dubai and was involved in more than 200 meetings about sales and coproduction with distributors, TV channels and VOD platforms from the region. 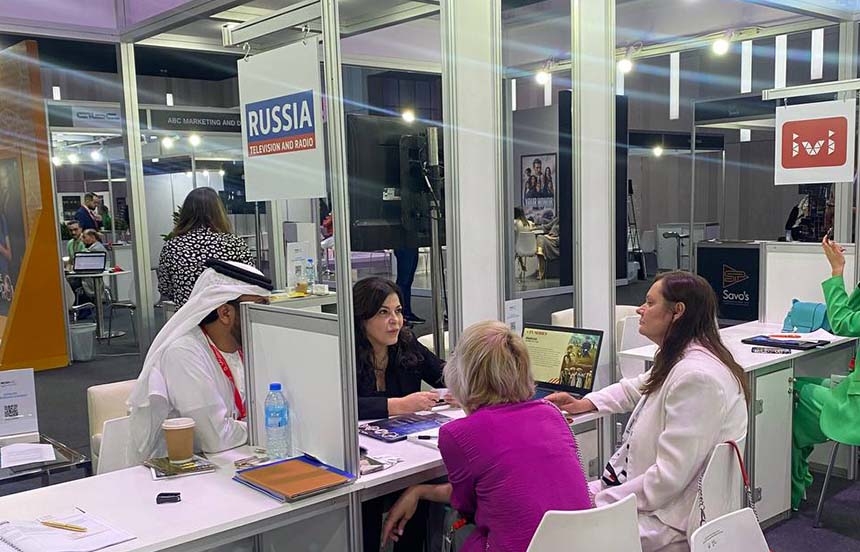 The Russian film industry has summed up the results of participation in the TV content market DISCOP Dubai, which took place on May 17–19. Representatives of the UAE, Turkey, India, Saudi Arabia, and Lebanon showed the greatest interest in Russian content; at the top were animation and historical and drama series.

In total, Russian companies were involved in more than 200 meetings about sales and coproduction with distributors, TV channels and VOD platforms. Twelve Russian producers of films, series and animations were presented at the Russian Content Worldwide (RCW) stand, organized by ROSKINO, the Russian film promotion body, with the support of the Ministry of Culture of the Russian Federation. Some companies also presented their projects as part of the catalog.

Inna Shalyto, CEO of ROSKINO says, “The DISCOP market in Dubai confirmed the prospect of further work with Middle East and North Africa, but also with India, whose representatives are also actively involved in content markets in the Middle East and have showed great interest in multilateral cooperation with the Russian film industry. After participating in two major events in the UAE—in November 2021 at the Dubai International Content Market (DICM) and in May DISCOP Dubai—there is already an understanding of the trends in this region, audience needs, and content specifics; and important business contacts with key players have been identified. ROSKINO is heading to the East; as part of DISCOP Dubai, the Russian industry received invitations to several more international film markets. We are also in dialogue with the UAE, Vietnam, India and other countries.”

DRAMA OFFER
Sovtelexport, the official content distributor of Russia Television and Radio, noted that the main interest of buyers was in a new historical project - the adventure drama "Elizaveta" about the fate of the young daughter of Peter the Great, who was destined to become a great Russian empress. Proposals have been received to license the historical series "Ekaterina. Pretenders" and the drama "The Son". The feature film "Elsa's Land" interested representatives of a number of digital platforms. The streaming service Noor Play is considering acquiring the multi-episode drama "Zuleikha Opens Her Eyes". Market participants did not ignore documentaries from the Russia Television and Radio catalog—the Turkish distributor confirmed its interest in "Kursk", "Salyut-7" and "The Great Unknown War".

START presented some of the most successful projects. The greatest interest among local players, in particular, from streaming platforms and channels, was in the comedy series "Ms Sweet", which focuses on family values important for the countries of the region, as well as in the second season of the mystical drama series "Passengers". The latter interested local buyers not only as a finished product, but also as a format for adaptation to the local market. Separately, distributors in MENA noted the action drama "Kris+Tina" and the psychological thriller "Mediator", which are currently being negotiated.

Representatives of the online cinema, IVI, which for the first time participated in the RCW stand in MENA, spoke about the high interest of Turkish, Indian, UAE, Pakistan companies, to the series "Tenderness".  Buyers were also attracted by the action comedy "Welcome back!". Representatives of IVI noted the requests of buyers for long series (dramatic and historical) with Arabic dubbing. The online cinema is also negotiating co-productions with Turkey.

Vodorod Pictures revealed that preliminary negotiations were held with UAE companies concerning the sale of digital rights to the biographical drama "Lord of the Wind" in MENA. Art Pictures Studio and Vodorod Pictures are engaged in the production.

Buyers from the UAE, Turkey, Jordan, India, Pakistan and other countries of the region showed active interest in the film catalog of All Media (a START company). The most interesting projects for buyers were the family fantasy "Red Riding Hood", the original START thriller "Behind closed doors", the drama "The Riot", and the company's animation projects.

Russkoe Film Company was presenting their new 12-episode detective drama "The Cruel World of Men" that centers on a successful young financier who becomes a victim of a financial scam while Kinopoisk was showing the series "Patient Zero" (with Sreda Production), which tells about the first major outbreak of HIV in the USSR. They were also presenting a historical fantasy "Aeterna. Part 1."

RUSSIAN ANIMATION
SMF Animation presented animated series at DISCOP Dubai: "Secrets of the Honey Hills", "The Adventures of Peter and Wolf", "Claymotions", "Monsikids", and "Mr Theo, Cat and Dog." The company said that there are about 50 OTT platforms in the MENA region that are interested in expanding their libraries for children and families, and now is the best time to discuss the sale of media rights, the creation of joint projects, and the localization of existing projects.

Platoshka animation studio presented the animated series "The Beadies" at the DISCOP market for the 0-5 year-old audience. The series with elements of edutainment has sparked interest from Turkish and Arabic channels, OTT sites and distributors, and the first potential deals in the MENA region have been outlined.

CTB Film Company has reached preliminary agreements on selling the feature films and series produced by the company over the past 15 years. CTB is also continuing its successful cooperation with the Arab company Front Row, which acquired the rights to the animated full-length musical "The Barkers Team" and the cartoon "Marakuda" in MENA; the deal was concluded by CTB's sales agent—Luminescence. The company also said that in 2022, MENA will release the action movie "Infiltration" the rights to which were previously acquired by NSTARs.