NTV's General Producer has received the Lifetime Achievement Award, one of the world's most coveted TV awards. 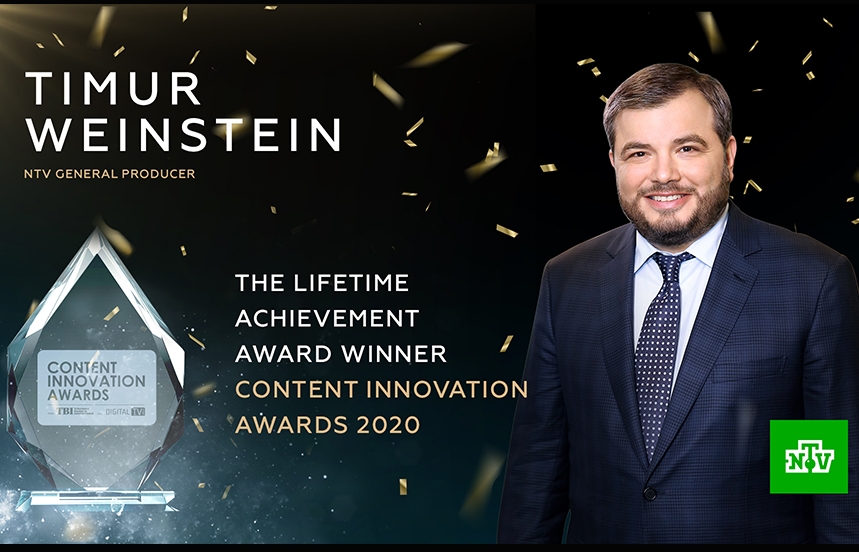 Timur Weinstein, NTV's General Producer, has received the Lifetime Achievement Award at the 2020 Content Innovation Awards. This is one of the world's most coveted TV awards given for significant contributions to the development of the international television industry.

There were 23 categories, and the nominees included people and projects from global players such as HBO, BBC Studios Distribution, ViacomCBS, Endemol, Rai-Radiotelevisione Italiana, Dori Media Group, Gloob, and many others. The experts' panel consisted of leading industry figures and they worked really hard to select the winners.

"It's a great honor to receive this award and to have my colleagues recognize my professional contribution. I am deeply grateful to the organizers who were still able to hold this event despite the pandemics. This means a lot for all of us in the TV industry," says Timur Weinstein, NTV's General Producer.

Timur Weinstein is a staple in the Russian media business. He founded the Lean-M production center and WeiT Media and became the only Russian producer to sell his two businesses to foreign companies. Lean-M was acquired by Sony Pictures Television International and WeiT Media became a part of Endemol Shine Group, a Dutch global powerhouse. In 2015, Weinstein took the reins at NTV and initiated a big transformation that resulted in a completely new lineup of high-quality projects. Timur Weinstein was also the moving force behind the NTV international distribution.

Today, NTV's projects have a global reach. They are on major streaming services including Netflix, Amazon Prime Video, Bilibili and TenTime, and in international distributors' catalogues all over the world. Timur Weinstein has more than 300 TV projects in his professional portfolio.  The majority of them premiere in primetime on the biggest Russian TV channels. His most famous works include: "The Road to Calvary", an adaptation of the novel by Aleksey Tolstoy, the film "Doctor Lisa", the thriller "Beyond Death", the Russian adaptation of the Swedish-Dutch TV series "Bron/Broen", "Brass Sun", a war drama starring Vladimir Mashkov, TV series "Nevsky", "Dr. Driver", "Dinosaur" and shows "Superstar!", "The Masked Singer", "Secret for a Million", "DNA", and "Super You!".

NTV SHOWS CATCH UP THE ATTENTION OF THE INTERNATIONAL MARKET
Distribution